I know, they should be named “Habanitos”, probably. But if you want to complain, call the cigars company.

However, I found a small cigar box in my GF possessions, and I took it. Well, she gave me, officially. That’s a pretty simple cigar box, but the wood grain has something… tropical. It’s hard to explain, but it’s a light and striped wood, might look sophisticated even though the assembly of the box itself is pretty simple and rough. 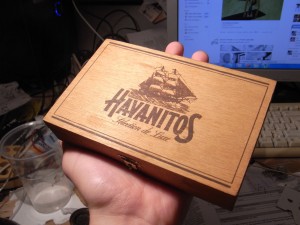 But… the feeling was extremely cool, and i decided to make a miniature box out of it.
Now, the best thing of 15mm miniatures is that they are light. Cheap and light. The two best things of 15mm are that they are cheap, light and fast to paint. The three best things…
Ok, 15mm have a lot of good things. Among their various weaponry there’s the fact that they are light. Light enough to be held with a single magnet with a relatively remote risk of falling.
Thus, with PVA glue and Neodymium magnets, I glued a layer of magnets on the base of the box. In the picture you can also see a very WIP of the 49 habanitos that are going to fit into the box once painted. 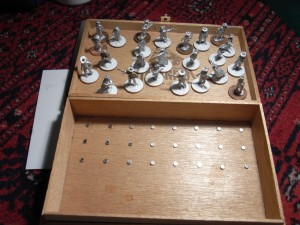 Now, the box was really nice, but I wanted something cooler. I crawled the internet for a while, finding some nice photos and newspapers. I put all them on a A4 page, ready for a color printer. 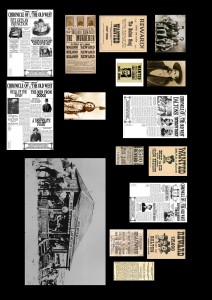 Once accurately cut, i’ve dipped them in coffee mixed with water. For American readers: use just coffee, probably there’s already too much water in it. For French readers: avoid butter.

After the dip I let the paper dry. Once dried I applied some PVA on the back side, covering all the surface, and then I glued them on the wood. I thought to cover with a layer of glue the whole box in order to protect it, but I didn’t since I was afraid to spoil the appearance of the wood grain. 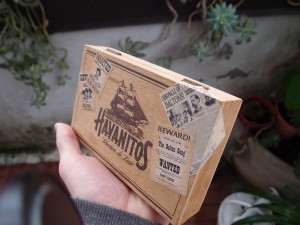 I glued some of the pictures on the inside too, and added a couple of cords on the sides, to avoid the box to open completely. 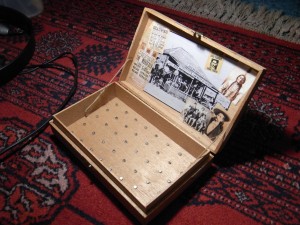 And… that’s the finished piece! It contains 49 cowboys, including a mounted one, and the whole set can be flipped upside down with no damages… unless you shake it too much, of course. 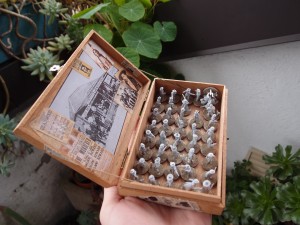 When everything will be done I will make a proper post to celebrate it. Besides, it would be one of the few project I ever finished. 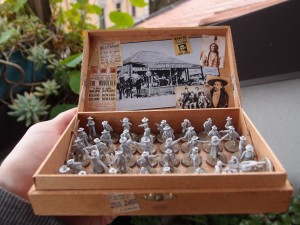