(Note for the reader: that was the first model Icreated for Iron Clouds. At this time the game was not as solid as it is now, and a few years passed. The ship design didn’t change much, although I’ve re-sculpted it entirely in the following years, adding new ships to the fleet. Back to the article, now.)

Hi Everyone! Finally I’m proud to release my first 3d-sculpted model! Actually, I do not plan to sell it (even though if you are interested you can still contact me!), but I’m still very happy of the result, and I’m very excited thinking of the future perspectives of this new field in my model activities.

All started by a simple draw. 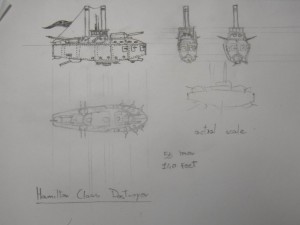 In a few hours (not a very long time, I’ve to say) Imodelled a first shape. I’ve changed many parts before the printing, but this was the first “complete” model I had. A new deck was made later, and some little modifications on the hull, but basically that was the ship. 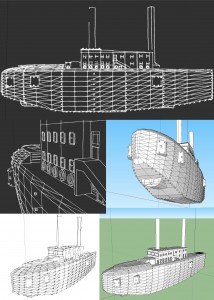 From Sketchup, following this tutorial I exported the model in MeshLab. I had to conjunct the parts, in order to have a single piece at the end (something like a sprue). Note that the model is not the definitive one, I just made screen on a mid point of the production. 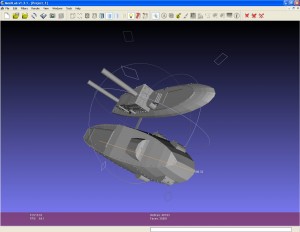 From there, still following the tutorial, I went on Netfabb… It is a sort of nursery for the holed meshes. 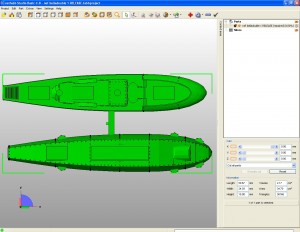 AAAAND….. IT ARRIVED! After much less than I expected, the package arrived. It was a huge box full of (almost) nothing, but it was great nonetheless! 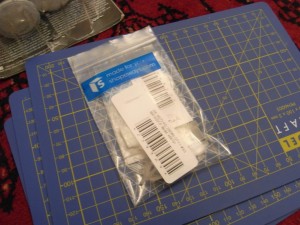 I carefully opened the package, then I break the sprues and that was the pieces. The photo is enough detailed to show you the details… and the difects :-\ Sadly, i’ve to say that the layer lines are quite visible on the smooth surfaces. That’s a problem, but it is something you can live with, if you are aware of it. Anyway, the pieces looked like this! That’s the British Battlecruiser (5 cm long) 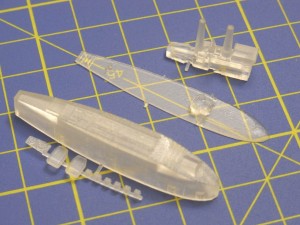 And that’s the Destroyer (3 cm long) 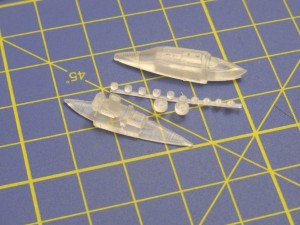 Some building also. I made some experiments, to test the quality on various aspects: The vertical surface, the diagonal one, the round shapes. I’ve to say, i’m very impressed by the results on such small pieces! 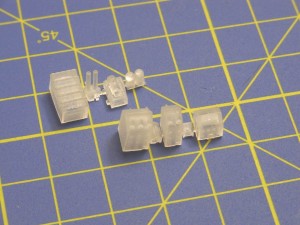 Then i started to prepare the mould. With a little layer of Cyanacrilic glue, i put all the parts on a plasticard panel… 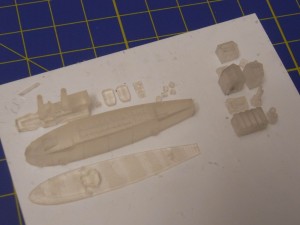 …and made the box to contain the vulcanizing silicon rubber. 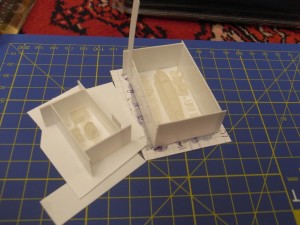 Then i waited for the vulcanization, then i cast the first ship. After adding the pins for the cannon barrels, that’s the result. 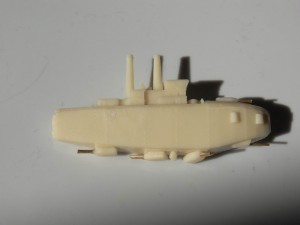 Look at my finger: that’s SMALL! 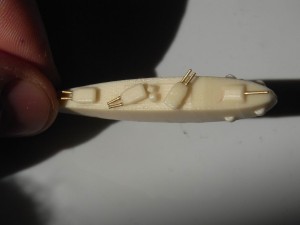 I tried then some colour schemes: Since i was not shure I made various experiments. The two that I liked more were the grey one (very WWI)… 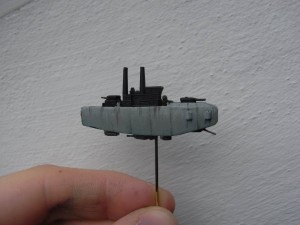 …and the barracuda striped camo. (OK, there’s no clue for a camo in the sky, but that’s cool. Those are flying ships, flying! Do you get it? So probably the camouflage issue is the last of the problems for the history geeks around here! ) 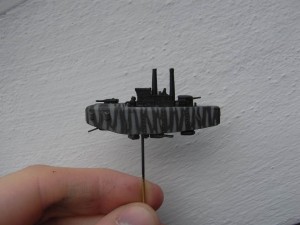 I also glued some house casts together, but i hadn’t the time to paint them. Again, black-primed they show even better the amazing level of details. Maybe the photo is not at his best, though. 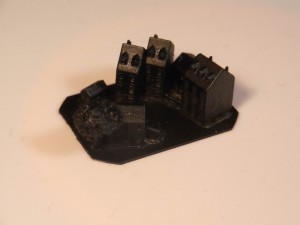 Anyway, after adding the details, the floating line (with some rubber mask i made the aging effect), and adding a heavy layer of pigments, that’s the finished result! The name is a decal, laserprinted and adapted accurately. The size is 3Pt. Note that half of the barrels already fell off, and at the moment even less are holding there. But it’s because of the cannon body shape: I’ve to recast a better one, with the appropriate joints for the barrels. Otherwise they are just glued with a tip of glue. Not enough, definitely. 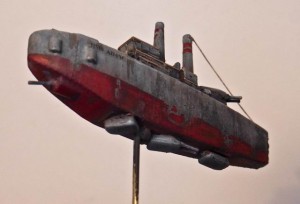 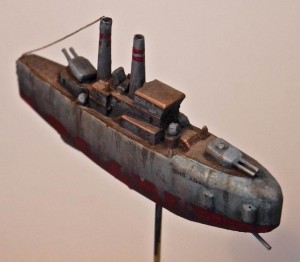 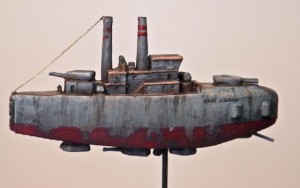 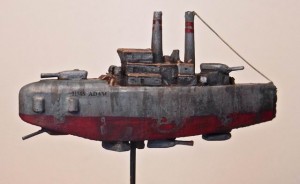 Conclusions: Even though the rapid prototyping isn’t the new Mecca, it is a valid solution for small pieces, mechanical parts and such. Sculpting something at this level of detail is not impossible, but since a high simmetry is needed, it would require dozens of hours of work. With less than 15$ i had my ship, and resin casting it the single piece costs to me less than 50 cents, now! I’m ready for my fleet! It took quite a lot of time, but i’m very happy with the result! And most of everything else, I’m still faster than Defiance Games! Cheers,