This growing set of futuristic scenery sculpted for White Dragon Miniatures in a joint venture to define a new standard for 15mm scenery. What we produced so far is a set of highly detailed buildings to be used together with the Urban Elements showcased in the other article.

Hab Block One – a three stories building, approximately 11 cm tall, heavily weathered and loaded with details. From the website:
“One of the challenges that faced EEF engineers was how to actually support the colonies once they arrived at their respective planetary destinations. One answer was to create a series of pre-fabricated buildings to quickly provide habitation and infrastructure on the target worlds, with Hab Block One being one of many which now furnish the inside of New Helix’s biodomes. Despite initial well thought-out urban planning, the population explosion has meant they have strewn across the surface where they jostle for every square foot of the habitats’ cramped confines.

Once the surface war began, and sides became fractured, these Hab Blocks would essentially become charnel houses for the deadly street fighting and close quarter battles as all sides attempted to wrestle control, inch by bloody inch. The hard structural composition provided ideal bastions of resistance for those who tried to hold them against the enemy. Later accounts would often describe carefully prepared fields of fire and booby traps to ambush those attempting to capture these war torn urban death traps.” 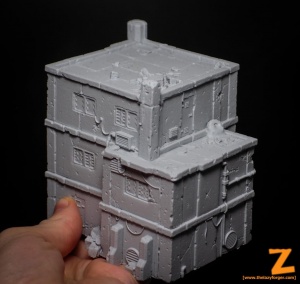 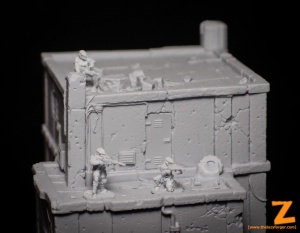 Control Tower – Similar in heigth with the Hab Block One, but slimmer. Not for sale yet, and produced with a different technique. You can see the concrete lines left during the construction. 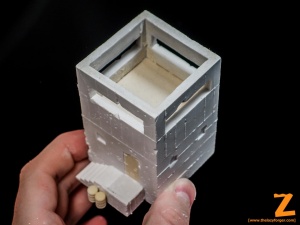 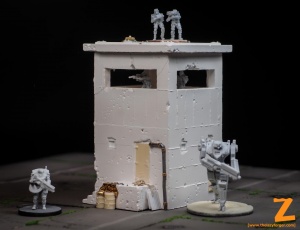 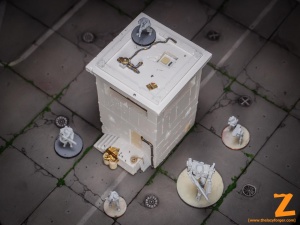 Below you can peek some details of the original master of the Hab Block. 90% of the structure had a 3D printing phase in the process, although most of it passed through several hours of hand work before the completion. 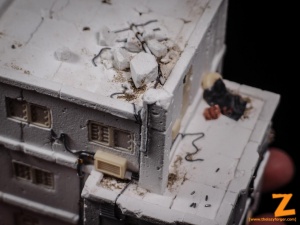 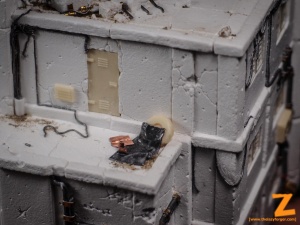 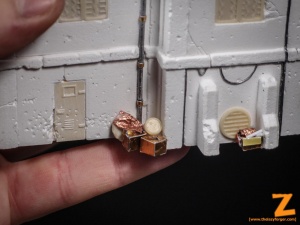 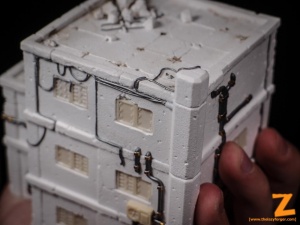 Great piece of work my friend,
Shows you are very creative.

One question if I may, What do you use for the large pipes ? Solder ? ( at least that’s what I use for thin pipes,basically like the example below ) and the straps look like copper sheet.

Keep it up
Z

Thank you Z!
Yeah, it’s soldering wire (in fact, all of the cables are, using different thicknesses i manage to give a feeling of randomness) and the straps are obtained from a tomato paste tube. I don’t think it’s copper, it looks more like painted aluminum to me.